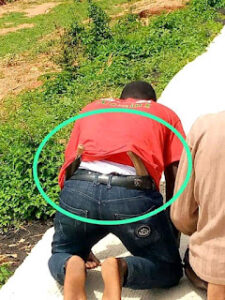 There is a looming trouble in Jalingo the Taraba state capital as Danbaba Suntai Airpot Jalingo has been temporarily shut down following the massive presence of  political thugs  suspected to be supporters of Senator Emmanuel Bwacha in the vicinity.

Senator Emmanuel Bwacha, the senator representative of Taraba south and gubernatorial candidate under the platform of the All progressive congress (APC) was denied access to landing at the Danbaba suntai Airport in Jalingo, Taraba state capital following the shutdown of the airport as a result of thugs who pose as a security challenge to the state.

Photos made available to Rhapsodi Affos Blog (RAB) shows some of the thugs with weapons such as cutlass, knives, sticks, etc, and with inscriptions “See Bwacha is coming” waiting to receive the senator.

Supporters of the senator have since taken to the media to express their displeasure and disappointments, some blamed the state government while others blamed his APC contenders.

While some believe that it was a deliberate plan to frustrate the senator, others feel its necessary to maintain security and order in the state as the state and country is still fragile. 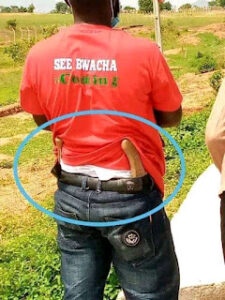 Recall that Senator Bwacha who was the senate deputy minority leader decamped from PDP to APC to pursue his gubernatorial ambition. Rhapsodi Affos Blog (RAB) gathered from multiple sources that his decamping to APC didn’t go well with some APC chieftains in the state who also have interest in vying for the same position.