Tragedy struck as not less than two people have been reportedly killed, many injured including the Divisional Police Officer (DPO) of Ardo-kola local council following a disagreement between two communities during a football match in Nukkai, a suburb of Jalingo, the Taraba  State capital.

Several others were said to have also been injured, with some receiving treatment at various health facilities in the area.

Taraba state police public relation officer (PPRO), DSP Abdullahi confirmed the incident to our reporter, however he said only one person was killed.

According to DSP Usman, The DPO’s vehicle was also vandalized, with his revolving light and windscreen shattered in the attack.

”This incident started at a football pitch behind the Taraba State Polytechnic, where a disagreement ensued and one of the footballers was killed.

”For peace to reign, the Divisional Police Officer of Ardo-kola local council moved in with his men to ensure the safety of lives and property as the other community members identified the killer of their brother and tried to take revenge.

”In an attempt to get elders of the two communities to talk to their youths, the youths started pelting stones at the police van and in the process, his head got broken, windscreen and resolver light damaged.

L He and his men are currently receiving treatment at the police clinic in Jalingo. For me, it is a case of two brothers who speak the same language (Kona) but live in different settlements,” the police spokesman explained.

He noted that arrests have been made and an investigation into the incident has been fully launched.

As at the time of filing this report, peace has returned to the areas as vehicles of security operations were seen there. 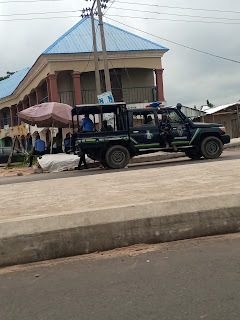