House Completely Razed Down By Fire in Jalingo, Fire Outbreak Averted in Student Villa in Wukari

A house has been reportedly been destroyed following a gas explosion at the Nukkai area of Jalingo, the Taraba state capital.

A source told our reporter that items worth millions of naira have been destroyed after the gas exploded. The source who is a resident of the area alleged that a 3-year-old boy was in the room as of the time of the outbreak. However, Rhapsodi Affos Blog (RAB) reporter is yet to confirm whether the alleged child is alive or not.

As at the time of filling, this report the fire has been extinguished.

In the same development, a fire outbreak was averted at student villa, Agbunshu estate of Federal University Wukari.

Our reporter who was at the scene of the incident said, a returning student who was cleaning the environment, lightened the fire to burn dirts. Without his knowledge, the fire escalated and caught some bushes besides the compound which later burned some part of the roof and ceiling of some of the buildings.

According to our reporter, some doors of rooms where forcefully opened and roofs forcefully removed in the bid to quench the outbreak. It took the effort of both students and other residents to be able to quench the fore after about one hour. Our reporter added. 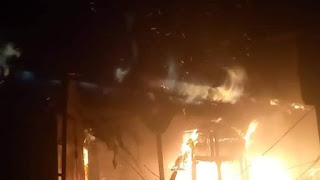