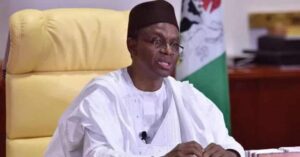 Governor Nasir El Rufai of Kaduna State has praised Kaduna State Judiciary as being one of the best in the country and the administration’s pride of its achievements as testified by the World Bank.

The Governor poured encomiums on the judiciary at the administration of the oath of office on the Acting Grand Khadi of Kaduna state, Hon Muhammed Aminu Danjuma at Sir Kashim Ibrahim House on Tuesday.

‘’In the last Ease of Doing Business ranking by the World Bank in 2018, the Kaduna State judiciary was ranked number 1 in resolving Commercial Disputes and Civil cases.”

‘’ This is because of the hard work of our judges at all levels, particularly our High Court and Appellate Court judges that are overworked,’’ he said.

A statement from Sir Kashim Ibrahim House said El Rufai expressed gratitude for the excellent work that the judiciary has been performing, promising that his administration will continue to do its best ‘’ to continue to encourage you. ‘’

He added that Kaduna state government ‘’will continue to do more within the limits of our financial constraints.’’

The Governor also thanked the immediate past Grand Khadi, Hon Abdurrahman Umar Abubakar for his meritorious service to the state, especially his input on the proposed Judicial Reforms Bill.

The Governor said he found the Ex- Grand Khadi’s comments very educating, adding that the Ministry of Justice will rework the Judicial Reforms Bill to address the concerns of all stakeholders.