Not less than 10 people including Rhapsodi Affos Blog (RAB) reporter were reportedly burned by fire during the final rite (Pankya) of His Majesty, Dr. Shekarau Angyu Masa-Ibi CON, The AKU UKA, in Wukari, on Friday.

The incident, it was gathered happened at the front of Aku Uka’s palace during the procession. While at the display, traditionalist brought out a pot with fire in it and did some “magical display”.

Mourners, spectators, and supporters of the late ruler of Kwararafa kingdom who came to pay homage and their last respect to the king gathered all around to watch the display. One of the young men performing the “magical fire display” drank a liquid in a bottle which was suspected to be petrol, poured on a pot with flame on the fire and it was quenched, spectators started hailing him.

He then emptied the bottle containing petrol into the pot and it it caught fire which he threw into the crowd. Everyone flew for safety but some were not lucky as the flaming fire injured many.

Many were critically injured. One of the victims’ skin was completely burned. As a visit by our reporter in the hospital met him, crying and screaming of pains.

Another of the victims, a 15-18 years old boy, had part of his chest burned by the first and was equally seen in pain, crying in the hospital.

Our reporter, Musa Rhapsodi Affos was also affected as his left ear was affected by fire and some part of his face. 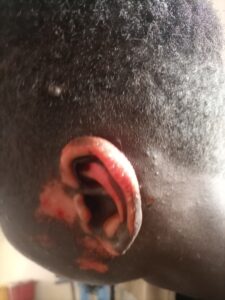